Disinfecting Streets in the Emirates

Work with Special Freight on Aviainitiative 2020 by ACEX and SPCP

Alliances of all Countries, Unite! 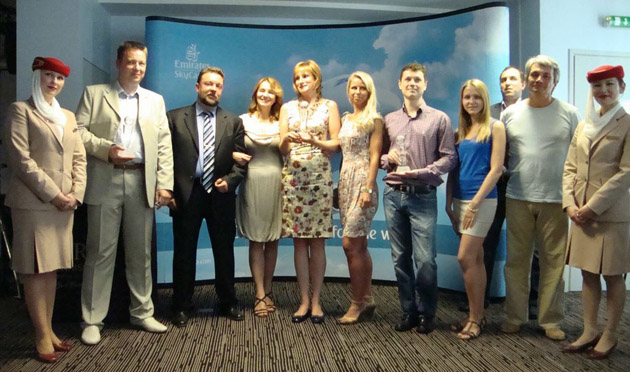 Emirates Airlines, being one of the world most dynamically developing air companies celebrated the 10th anniversary of successful activity in Russia in July 2013. Celebration on the occasion of the 10 anniversary from the date of the first flight on a route Dubai – Moscow took place in the Renaissance hotel, where Emirates Airlines Russian and Dubai representatives have gathered.

10 years ago one of the first large freights of Emirates Airlines in Russia was sent by CARGO EXPRESS Moscow representative office, which is a part of the international transport ACEX Group network.

Since then, for many years (in 2009-2010 and in 2011-2012) CARGO EXPRESS remains "The Best TOP Agent of Emirates", carrying out the maximum scope of transportations and repeatedly receiving awards and prizes from the air company.

According to Dmitry Selichev, the Head of Emirates cargo department, – "CARGO EXPRESS proved itself as a reliable partner, capable to carry out air transportation in all directions, to support the favourable prices and the highest service standards".

As a sign of acknowledgement for long-term successful cooperation, CARGO EXPRESS was awarded with the valuable present – memorable glass stele with Emirates Airlines logo.

CARGO EXPRESS, ACEX Group member, has been working at the international transportation market for more than 20 years, and is the top agent of many other world largest airlines.

Emirates Airlines is a quickly developing international airline, having one of the youngest planes parks and more than 500 awards for the best indicators of service from all around the world. Emirates Airlines carries out flights in 134 directions to 77 countries all over the world in 6 continents. The air fleet of airline consists of 201 wide body Airbus and Boeing planes.

ACEX uses cookies on websites in order to ensure the performance and user experience. If you continue to browse without changing your web browser cookie settings, you are agreeing to our use of cookies. ×